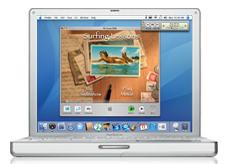 A recent study claims Apple is planning to create a new iPod effect with its new light-weight notebook models. The company aims to ship 3.27 million notebooks in 2006, a 42 percent increase compared to the 2.29 million units this year.

This translates to Apple's market share in the worldwide notebook market rising to 4.7 percent from 3.9 percent this year.
>br> "Compared to other makers which will post only moderate growth, Apple's performance is significant and worth paying attention to," Topology analyst Simon Yang said.

According to Yang, Apple notebooks are poised to grab consumers' attention next year as the company will unveil light-weight models with a stylish design aimed at luring female users.

Apple's new lineup will feature light 12-inch notebooks weighing in at 1.5kg as well as 14-inch models below 2kg.