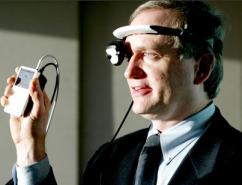 eMagin, a company that makes video display products for industrial and military use, is setting its sights on a new market - the Apple iPod.

The company developed a wearable headset system that plugs into the iPod and displays video from it in front of one eye, using optical technology to give the picture a higher resolution and make it appear larger than on the iPod's screen.

Gary Jones, president and CEO of eMagin Corp. of Bellevue, demonstrates his company's new wearable display for video iPods. Using the EyeBud headset is akin to watching a 105-inch display from 12 feet away. "Suddenly you've got this big-screen, movie-screen, home-theater experience wherever you are," he says.

The system, dubbed the EyeBud 800, is another entry in the booming ecosystem of accessories and complementary products that has emerged around Apple's portable music player. But this isn't in the realm of a $20 carrying case. Scheduled to debut in the first half of this year, the EyeBud is expected to retail for as much as $599 -- $200 more than the cost of a 60-gigabyte iPod.