More than a week ago I reported Western Digital is planning to release 150GB Raptor HDDs and today they have officially announced the server version. I'm not sure whether the gamer version is still coming up, maybe they have canned that one. The Western Digital enterprise Serial ATA WD1500ADFD 10,000RPM HDD features the performance of the original drive with additional features for server and networked storage applications.

Enterprise storage system vendors are increasingly embracing SATA hard drives as a reliable and cost-effective choice for servers and storage systems. When WD originally introduced the WD Raptor -- its first SATA drive -- in 2003, approximately 14 percent of hard drives used in multi-user applications were SATA technology, according to Gartner. The market research firm expects that portion to grow to 19 percent in 2005 and 30 percent by 2009.

The enterprise-class mechanical and electronics platform of WD Raptor is designed to meet the 24x7 demands of the enterprise environment. Continuing to be the world's most reliable SATA hard drive, WD Raptor is reliability-rated at 1.2 million hours MTBF (mean time between failure) in high duty cycle environments and is backed by a five-year warranty.

Update: There's already a review available over at Storage Review. They write this 150GB Raptor is up to 21 percent faster than its 74GB predecessor when it comes to single-user productivity and gaming tests!

Update 2: I've heard the gamer version will be called Raptor X WD1500AHFD. Unfortunately this version will cost about $349 BUT it will feature a window! Here's a picture (courtesy of PC Games Hardware): 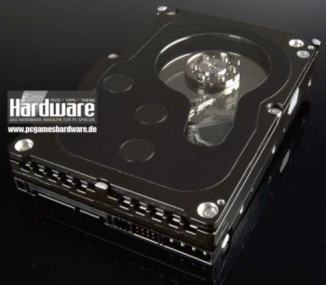 The WD Raptor X 150GB for gamers and enthusiasts