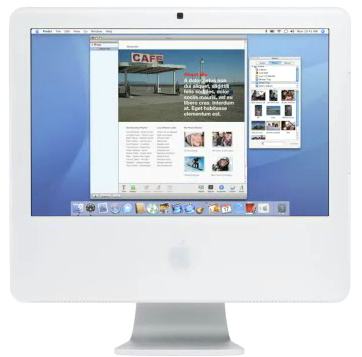 ARS Technica is one of the first to offer a review of the new 17-inch iMac Core Duo from Apple.

Externally, the iMac appears identical to its PowerPC predecessor. There's the small camera above the display, the same array of ports in back, and the same white keyboard and Mighty Mouse. It's the inside that's different. Instead of the venerable PowerPC 970 CPU, there's the latest from Intel: the Core Duo T2400.

The Core Duo is the second 65nm CPU from Intel (the first being the 65nm version of Presler), but the first to be widely available. Unlike the transition from 130nm to 90nm, which was the source of nightmares for engineers at both IBM and Intel, the move to 65nm appears to have gone nearly flawlessly for Intel.