Hypergiant stars may have planets too 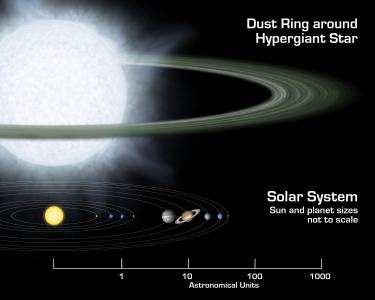 Scientists have found evidence that suggests planets might form and survive in surprisingly hostile environments. By using the NASA Spitzer Space Telescope they found dusty disks, the building blocks of planets, around two of the most massive starts known.

The discovery was made through NASA's Spitzer Space Telescope observations of two hypergiant stars in the Large Magellanic Cloud--the Milky Way's nearest neighboring galaxy--by a team led by Joel Kastner, a professor at Rochester Institute of Technology's Chester F. Carlson Center for Imaging Science. His team's findings will appear in the Feb. 10 issue of Astrophysical Journal Letters.

So far, searches for planets outside the solar system have been restricted to sun-like stars. All of these stars are older, dimmer and cooler objects than hypergiants, which are extraordinarily large and luminous but shorter-lived by billions of years.

Kastner and his team used infrared spectra obtained by Spitzer to study a population of dying stars. They added a new direction to their project when Spitzer's infrared spectrograph revealed unexpected information. Spitzer's sensitive spectrometer, which breaks down infrared radiation into component wavelengths as a prism splits visible light into a rainbow, indicated that a third of the stars in the population thought to be in decline--including two massive and exceedingly luminous hypergiants--were actually younger stars in varying stages of development.

The curious spectra of these two hypergiants (R126 and R66)--with one star being 70 times bigger than the sun--led Kastner to reexamine the stars' classifications as dying. The shape of the spectra, or the amount of light from different wavelengths, is characteristic of flattened disks of dust orbiting the stars.

The two stars' similar spectra differ in detail, with one encircled by dust in crystalline form, the other by more shapeless, amorphous dust grains. This expands the range of known conditions under which complex dust grains and molecules can form and persist around stars, Kastner says.

Kastner describes the complex mixture of dust detected around the stars as the "tip of the iceberg," probably signaling that the disks of debris surrounding the stars are similar to the solar system's Kuiper Belt, a vast, distant collection of comet- and even Pluto-like objects. "To explain the very strong infrared radiation we detected, the stars we observed would have to host especially large Kuiper belts," he says.

He adds: "If Kuiper belts are the smoking guns of planetary formation around stars, it seems that these stars, as massive as they are, may be forming planets."

Hypergiants are only a few million years old and have a relatively short lifespan as far as stars go, considering the billions of years it will take the sun to expire.

"These planetary systems, if they do form and exist, are short lived because these massive stars explode as supernovae," Kastner says. "So it's amazing that the raw material for planets could be found in such a hostile environment."

Kastner's study highlights only two of more than a dozen or so known examples of very massive stars in the Large Magellanic Cloud that are bright infrared sources. The next phase of the study will use new Spitzer spectra of the additional hypergiant stars to determine how many more are encircled by dusty disks and why only some of these disks contain crystalline dust grains.

"We've discovered a new class of object, and we need to use Spitzer to measure the infrared spectra of a lot more of these objects to learn how unique they really are," Kastner says.

Kastner's team includes Catherine Buchanan from RIT and B. Sargent and W.J. Forrest from the University of Rochester.