We’ve already done a review of a LED fan in the past and now we’ll be having a look on the UV reactive fans from Dynatron. They have a blue, green and orange version.


Dynatron
Dynatron was founded in 1991 in Taiwan, since then the production of fans has increased hugely and in 1995 they’ve opened a new head office in Fremont, California. Later they also opened other branches for sales operation in Walnut, Southern California, Miami Florida, and in Toronto, Canada.
They focused to develop more state-of the-art cooling products, and as a result of that they’ve obtained a substantial growth in sales and market share!


The fans arrived in a plain white box because Dynatron at the moment only has an OEM version of the fans, but I’ve been told that they will maybe get a retail package later. 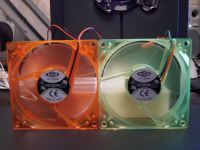 Here you can see them running

Now some little temperature testing on my test system with a room temperature of 20.5°C : 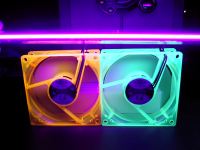 And here you see them react to UV! 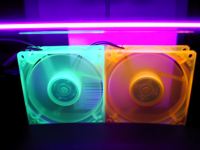 And a pic of the back!

Conclusion
Dynatrons UV reactive fans produce about 34 CFM which is the average amount of most 80mm fans that you will find. Now that may of course not be a good reason for you to get them, but the real reason to get these fans is that they are colored AND UV reactive!
They look very nice with a UV Cold Cathode and I’m sure that they will look very cool in a case with UV Cold Cathode + UV reactive rounded cables!!
Price is between $7.99 and $9.99


The bad stuff :
- The wire of the 3-pin connector gave me a fragile impression 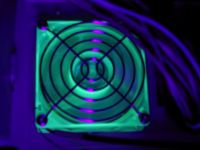 And to end , a little pic with the green one in my case