To the left of the keyboard we find the first set of five macro keys, with the bundled software you can program up to four macros per key. Please bear in mind that the Challenger Pro that I received has German localization, including a QWERTZ layout. QWERTY versions are obviously also available. 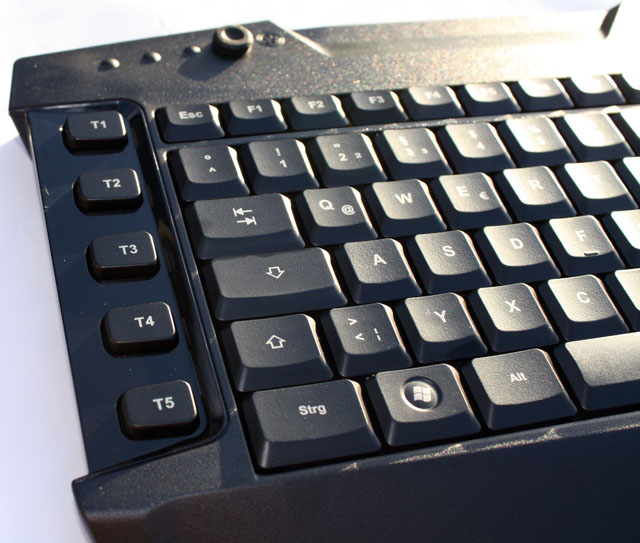 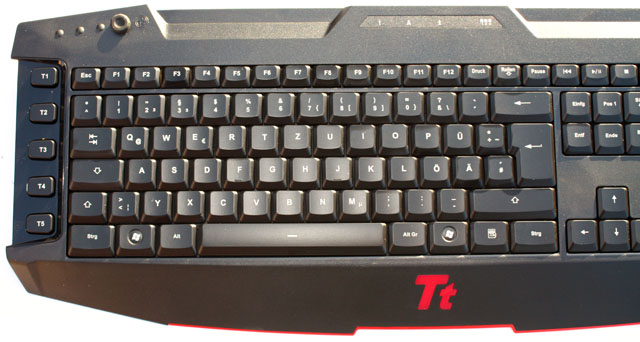 The included 30mm fan can be installed in two positions, on the upper left and on the upper right side of the keyboard. When not in use, the connectors are closed using a rubber plug.

To the middle we have the LED indicators for the scroll, caps and numpad lock keys, as well as indicator lights that show which of the four macro profiles is loaded. The first profile corresponds with a red LED light, the second one is green, third is blue and the fourth is purple. 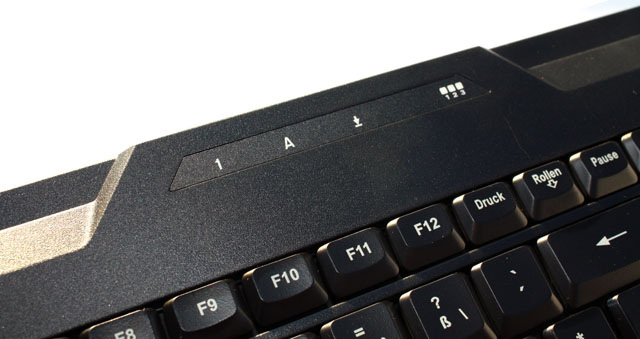 The fan can also be installed in the upper right corner of the keyboard, the hole is covered by the same rubber plug as used on the left of the keyboard.

The right side of the keyboard features five more macro keys as well as several multimedia keys. From left to right we have the "fast rewind", "play/pause", "stop", "fast forward" and volume keys, but unfortunately a mute key is missing from the mix. What I also find a bit strange is that "volume up" is left and "volume down" right. Right next to the multimedia keys is a key that lets you adjust the red backlight in four levels (off, 25%, 75%, 100), and a key for switching between the four macro profiles. 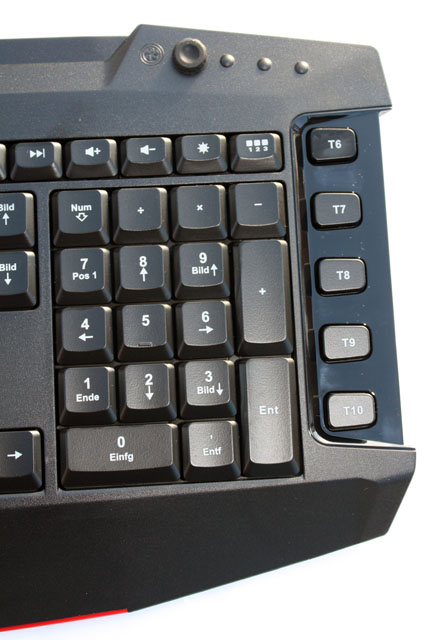 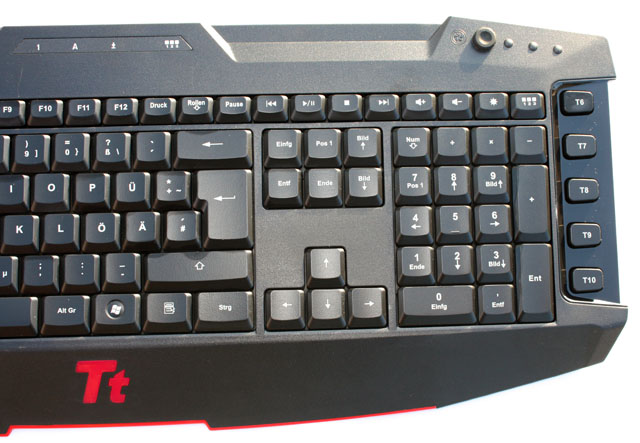 In the middle of the wristrest is a shiny red Tt eSPORTS logo. As I mentioned earlier in this review, the implementation reminds me a lot of how Razer integrates its logo in its gaming keyboards. Just like the rest of the keyboard, the logo is illuminated by bright red LEDs but it's not possible to reduce its intensity. You can only shut it on/off via the included software, and not via the keyboard's light switch.

At its thickest point the keyboard has a thickness of about 27mm.

The backside features two keyboard risers, enabling you to adjust the keyboard's height. 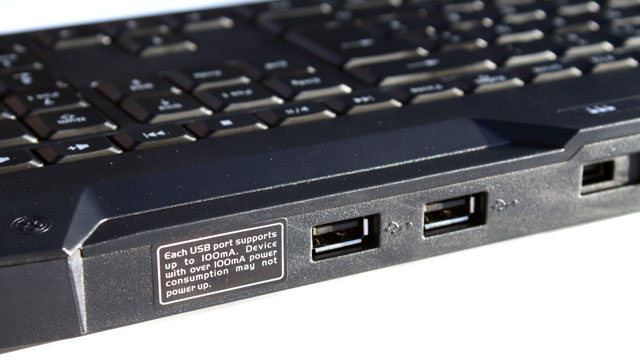 When not in use, the fan can be tucked away into the keyboard's fan storage compartment. 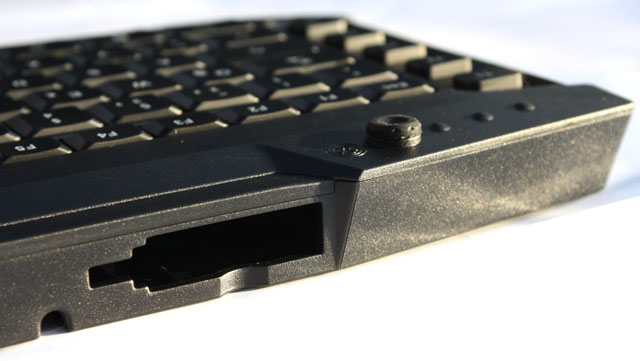 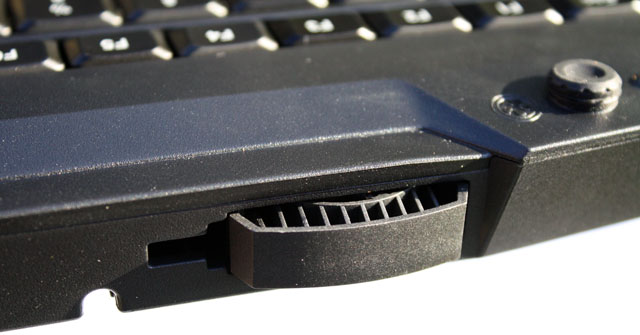 It's the first time I've seen a gaming keyboard with a fan. It's a very tiny model, it has a diameter of 30mm and pushes just 2.7CFM of air. The fan can be installed in the upper left or upper right corner of the keyboard, it's as simple as removing the rubber plug and pushing the fan into position. The fan can be rotated 180 degrees, it doesn't move a lot of air but I could definitely feel it. It's an eyecatcher without a doubt but in my opinion it's more of a gimmick than of actual use. Maybe it will help cool you down a bit on hot summer days, but during colder days I found it more of a distraction. In fact, the airflow's cooling sensation even felt a bit unpleasant. The good thing is that it's pretty silent, despite spinning at a whopping 6000RPM. 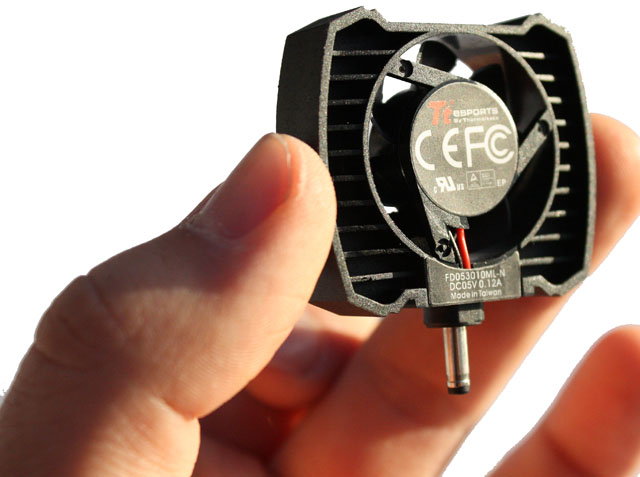 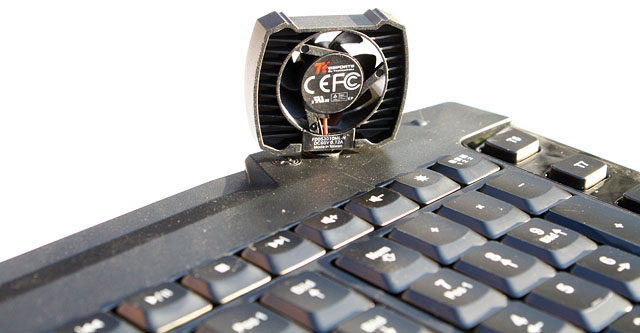