Two months ago Motorola released the Moto G7 series, a line of affordable smartphones that focus on what's most important to the user. The Moto G7 Plus is the subject of this review, it's aimed at delivering decent image quality, good battery life, and fast recharging. The phone packs a 16MP dual-camera system with optical image stabilization and offers AI features like Smart Composition and Auto-Smile capture to enhance your photos.

As I unpacked the Moto G7 Plus, my mind raced back to 2000. My very first phone was a Motorola device -- it was quite bulky and besides the ability to make calls its only other feature was texting. How times have changed! In 2011, Motorola Mobility got bought by Google and in 2014 the search giant sold the business to Lenovo. These days, the Motorola brand is a pretty small player in the smartphone market, with a global marketshare under 5 percent, but they still make interesting Android-based phones.

The Moto G7 Plus ships in a small, green-colored cardboard box. 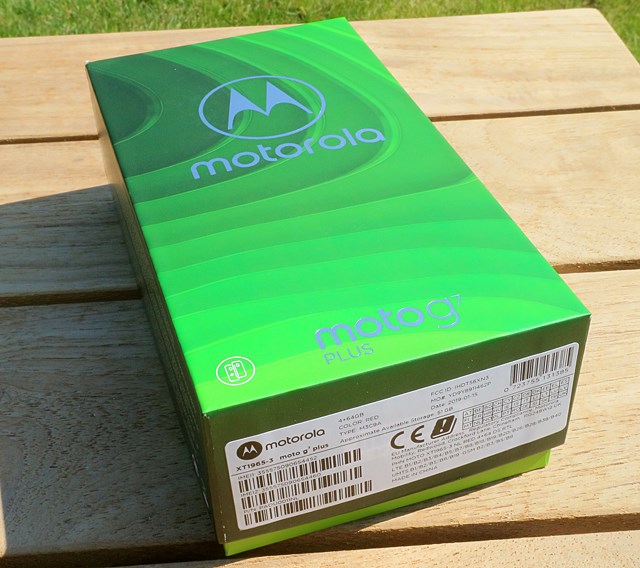 The phone is the first thing you see when you open the box. The design is similar to most smartphones, with a 6.2" Max Vision display that covers most of the front. 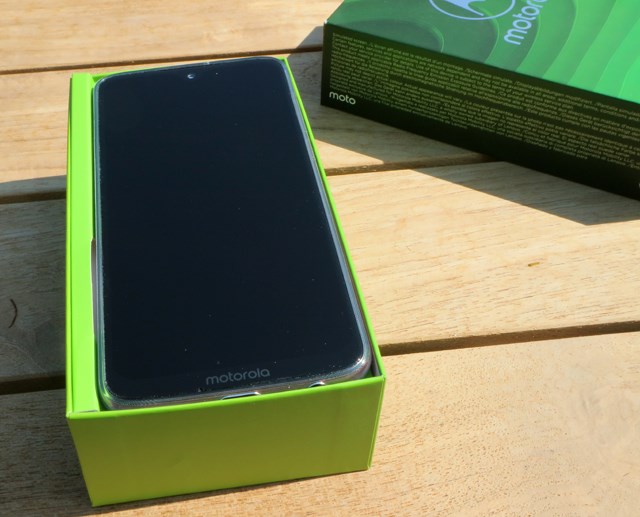 Not a lot of extras in the box; a manual and some legal info, a SIM card removal tool, and a charger with USB Type-C cable. One thing worth mentioning here is that the included charger offers "Turbo Charging", it can output up to 27W so this should ensure very fast recharging. 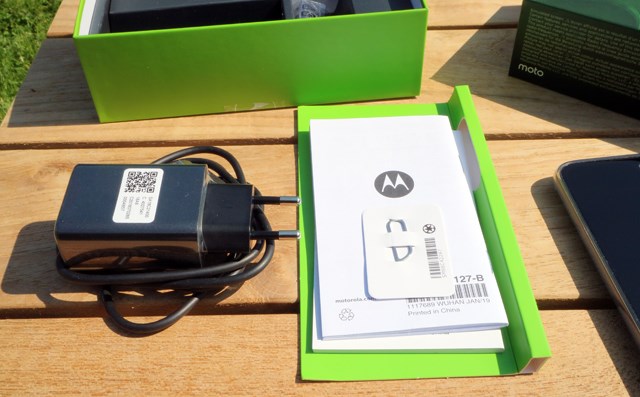 The first surprise when taking the phone out of the box is that it comes with a translucent silicone case. The included case is quite good, it provides a lot of extra grip and offers a little bit of protection for your phone. The Motorola G7 Plus measures 157mm x 75.3mm x 8.3mm and weighs 176g. It has a 6.2-inch IPS-based LCD screen with a 1080 x 2270 pixels resolution, 19:9 aspect ratio, and roughly 405ppi density. The screen is protected by Corning Gorilla Glass 3 and it has a notch-like design for the front camera, which results in a little more usable screen real estate. The selfie camera is a 12MP model that can shoot 4K video at up to 30fps and Full HD video at 30fps. The ability to record 4K with the selfie camera is a rare feature in the mid-range segment. 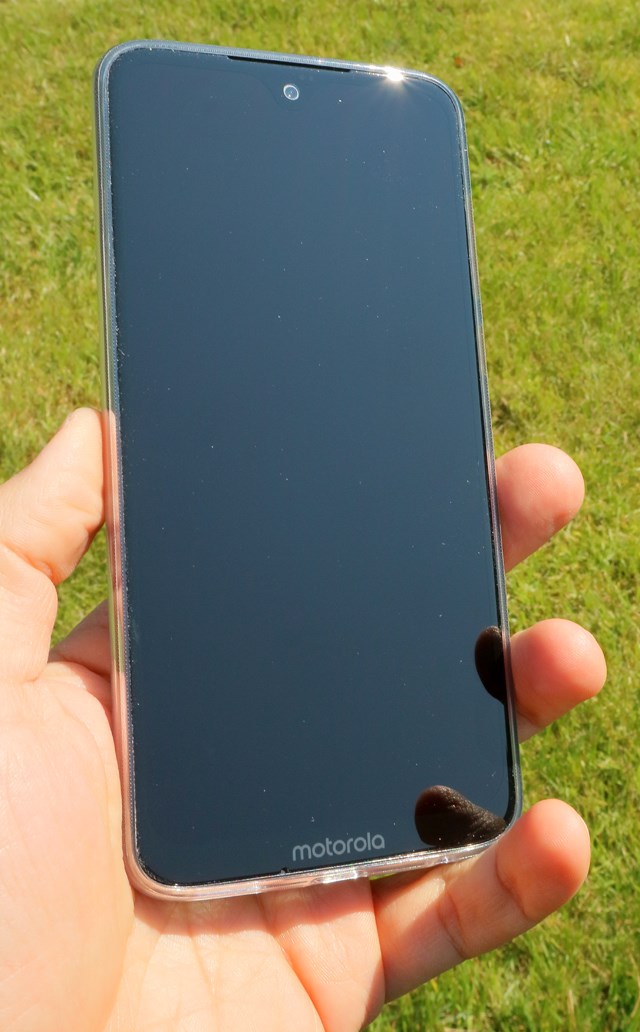 In terms of ports, the G7 Plus has a USB Type-C charging/data port as well as a 3.5mm headphone jack. Once you've switched to Bluetooth earphones you never want to go back to wires -- but it's nice that it's there. The G7 Plus also packs stereo sound, the device has two speakers and this results in relatively decent sound for this price class.

Three buttons on the right side of the G7 Plus. I don't think much explanation is needed here, one is the power button and the other two are the volume controls. The phone is not water or dustproof but it does have a coating that makes it splash resistant.

The SIM card tray requires a SIM tray removal tool -- which is included with the phone. The phone accepts two Nano-SIM cards and there is also a dedicated MicroSDXC memory slot. The G7 Plus packs 4GB RAM and it has 64GB of internal flash memory -- so that's already a lot of room for photos and videos without having to expand storage capacity with a microSD card.

The silicone case that ships with the G7 Plus does the job. It offers a little bit of protection and provides a lot of extra grip. Thin sizes and aluminum/glass enclosures look really great on phones -- but unfortunately, this all makes a phone dangerously slippy without a sleeve or a case. The included case is perhaps not the most aesthetic though.

Motorola picked a 3000mAh li-ion battery for the G7 Plus, which is not particularly large. The battery is non-removable and it supports Quick Charge 4. The included charger is a 27W model and this results in surprisingly fast charging. Charging from a battery level of around 20% to north of 90% takes barely half an hour. This is definitely one of the best features of this phone -- it recharges extremely fast. How long the battery will last depends heavily on how you use your phone. If you barely use your phone you can expect a couple of days between charges. If you're on Instagram and YouTube all the time, you'll have to recharge every day. 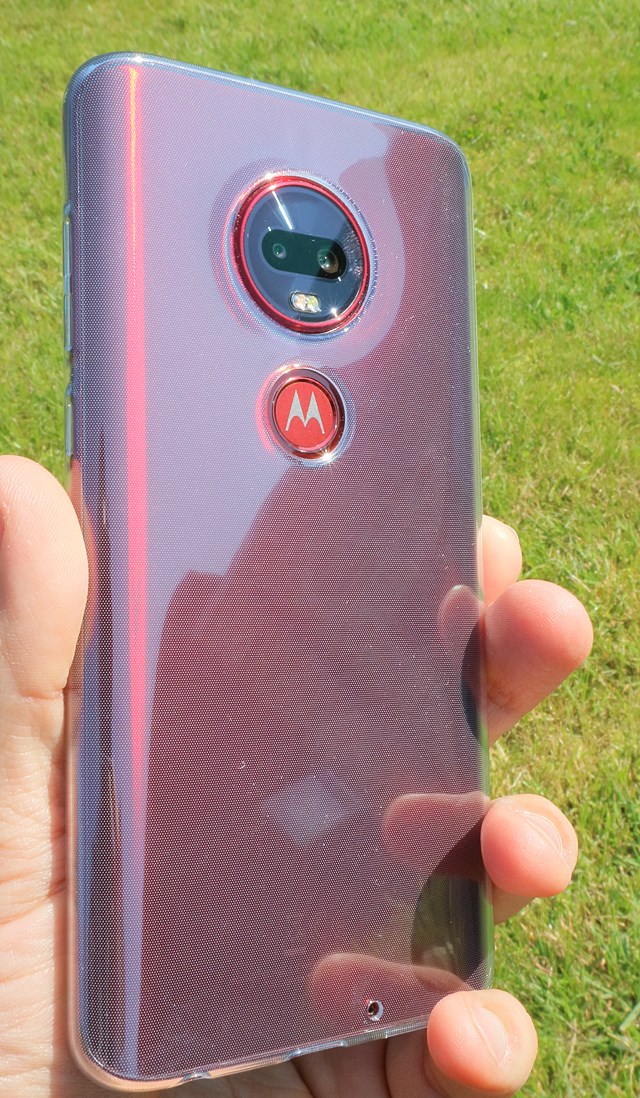 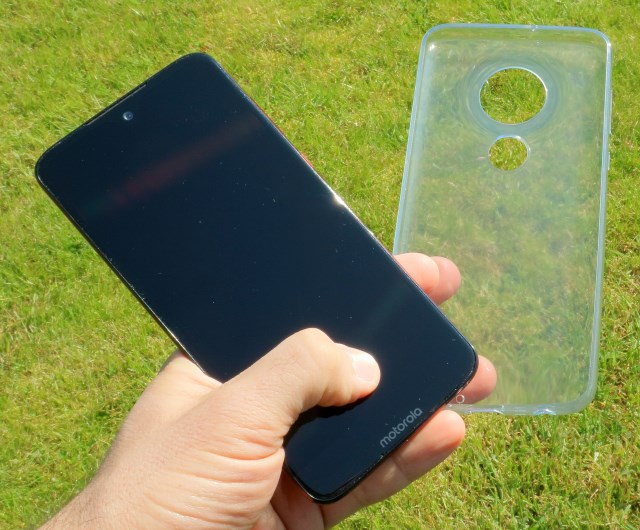 And finally, we have a shot of the phone without the case. This version is the Viva Red model, which looks surprisingly well. Motorola also offers a Deep Indigo model -- so it's a choice between red and dark blue. The rear features the camera as well as a Motorola logo that doubles as a fingerprint reader. One of the most important parts of a phone these days is the camera. Whether you're posting on social media or sending selfies to friends or lovers -- you desire at least a minimal level of quality for your photos and videos. And the bar gets higher and higher every year.

Motorola equipped the rear with a 16MP primary camera and a 5MP secondary camera for depth sensing. There is optical image stabilization, a dual-LED flash, and the ability to shoot in slow motion. The G7 Plus allows you to capture Full HD video at up to 120fps and you can even do 720p video at up to 240fps. In terms of photography, the G7 Plus has a lot of features, it even allows you to shoot in RAW mode. 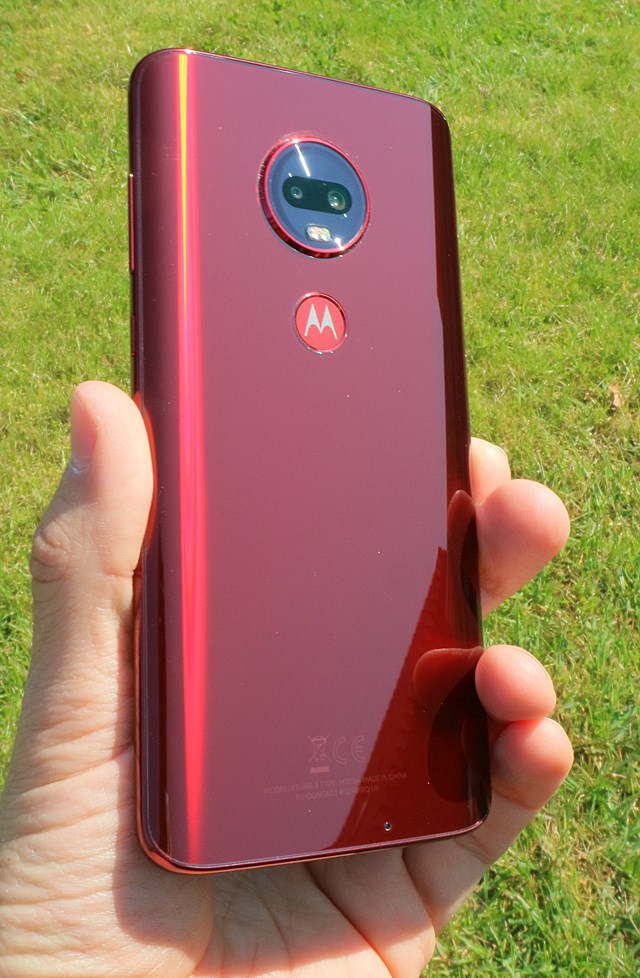 Key takeaway
With a suggested retail price of 299EUR there is a lot to like about the Motorola G7 Plus. It won't blow you away completely but it's an attractive pick in the mid-range segment. The Qualcomm Snapdragon 636 SoC is not the fastest yet Motorola managed to make the overall user experience on the G7 Plus quite snappy. Typical usage scenarios feel smooth and the average person who buys this phone will not be left longing for a faster processor.

The battery doesn't last extremely long but the fast charging more than makes up for this. Under half an hour of charging is usually enough to make it last another day. This is one of the areas where the G7 Plus really excels -- I can't rave enough about the 27W charging.

Stereo sound is a rare feature for the mid-range smartphone market and the speakers sound quite good. Similarly, the camera packs features that are usually reserved for the high-end segment but that doesn't mean it will replace a 300EUR camera or a dSLR. It is possible to shoot nice photos with the camera, with a good level of detail, especially in ideal conditions. In low-light conditions, the camera's performance drops considerably. There is 4K recording for both the front and rear camera, you can shoot 1080p at 120fps and 720p at up to 240fps with the rear camera, and there are a ton of special camera features. Motorola even came up with a smile detection technology that will automatically take a photo when everyone that's in the camera frame is smiling. Image quality is not on-par with flagship phones -- but what do you expect from a 299EUR phone?

The included version of Android 9.0 is pretty bald, which is a good thing in my opinion, but it does packs some interesting Motorola Experiences. Motorola guarantees at least two years of security updates and one Android version update. But as is typical, these updates can take some time to materialize. Overall, the Motorola G7 Plus is a decent contender in the mid-range segment. It's aesthetically pleasing, makes some good compromises, and will result in an enjoyable user experience.