Over seven years ago I saw a BBC Horizon documentary called "Monitor Me". The central premise of this episode was that in the future, apps and gadgets would have a profound impact on our well-being. One of the ideas was that constant health monitoring would help to detect illnesses and conditions at an early stage. Reliable early detection of health problems hasn't arrived yet but activity trackers have definitely become ubiquitous. There are a lot of manufacturers that make these gadgets and they're offered in various price categories -- depending on the level of features you require.

Smartwatches and traditional activity trackers are among the most popular wearables. One of the most well-known companies in this market segment is Fitbit. The first wrist-worn Fitbit tracker was launched in 2013 and the firm followed up with its first smartwatch in 2014. At the moment, Fitbit is no longer an independent company as it got acquired by Google in a deal worth $2.1 billion. This deal gives Google a lot more clout in the wearables market but the news about Fitbit's acquisition also sparked some concerns as privacy advocates are worried about what Google will do with this treasure trove of health data. In effort to alleviate these concerns, the search giant claims Fitbit data will be stored in a "silo" and will not be mixed with data used for advertising.

The subject of this review is Versa 3 -- which got launched last year. This model offers continuous tracking of your heart rate, tracks your sleep, can help motivate you to get more active, tracks workouts, and estimates your blood oxygen saturation (SpO2) while you sleep. Other than this the Versa 3 can keep you informed of smartphone notifications, you can check the weather, set alarms, control music (limited compatibility though), use Google Assistant or Amazon Alexa voice assistant, and make wireless NFC payments via Fitbit Pay.

There are a ton of features and the functionality can be further expanded by installing apps via the Fitbit app. At first sight, there are no real killer apps though. Compared with the Versa 2, one of the biggest advantages is the inclusion of a built-in GPS. This means you no longer have to carry your phone with you if you want to track a run, hike, or bike ride. The Versa 3 has everything onboard to monitor and calculate data like your heart rate, steps, distance, speed, calorie burn, etc. GPS data is saved so you can track where you ran or cycled via the Fitbit app.

Fitbit's Versa 3 ships in a small cardboard box with a grey/white design. The front has a nice photo of the watch and the rear briefly explains the device's features. 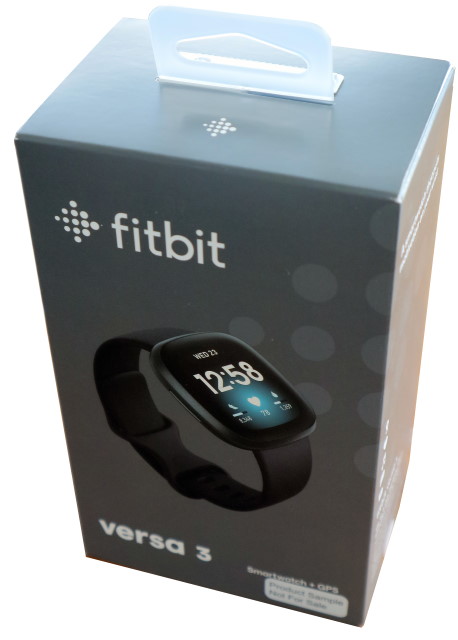 Inside the box we find the watch, the charger, and some brief how-to-get-started instructions. Basically, you need to download the Fitbit app on your smartphone, create an account and follow the instructions. Fitbit also includes a second, larger wristband that can be used if the default one is too small for your wrist. 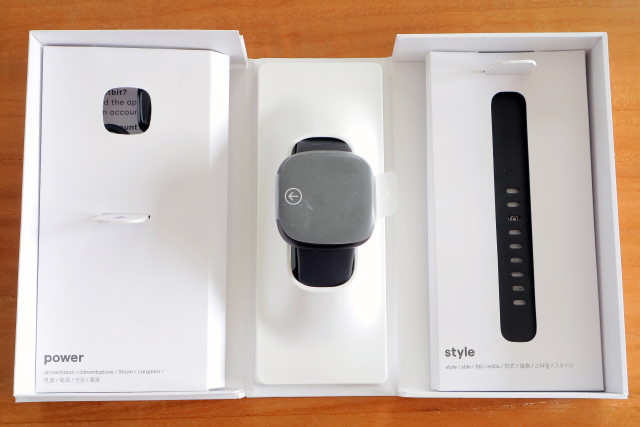 Charging the Fitbit Versa 3 is done via the included magnetic charger, a proprietary model that plugs into a USB Type-A port. The charger magnetically snaps to the back of the Versa 3. It's understandable why Fitbit didn't use something like a USB Type-C port to charge the device, it would look ugly and it would tamper with the device's waterproof design. Fitbit promises up to six days of battery life but that's too generous. During my testing, I had to charge the watch about every 3.5-4 days but I never let the battery drain below 12-15%. Ideally, devices like this are kept between 20 to 80 percent charged to maximize battery lifespan.

Battery life will depend heavily on how you use the watch. Higher brightness levels, heavy use of the GPS, enabling SpO2 tracking, and leaving the display "always-on" will ramp up battery consumption. For example, Fitbit claims you can get up to 12 hours of battery life with continuous GPS tracking. In my case, I set the screen wake to automatic, this means the display will light up each time you turn your wrist. I tracked about 5-6 workouts a week (during workouts the display is always on) and activated SpO2 tracking.

Interestingly, Fitbit automatically sends you an e-mail every time your battery level drops below 25 percent. Charging from "almost empty" to as-good-as-full takes about an hour. Battery life isn't terrible compared to competitors but more is always better -- this is one of the disadvantages of smartwatches versus old traditional watches. Having to remove the watch from your wrist up to two times a week is bothersome, to be honest. And you can't do it at night if you use the device to track your sleep. 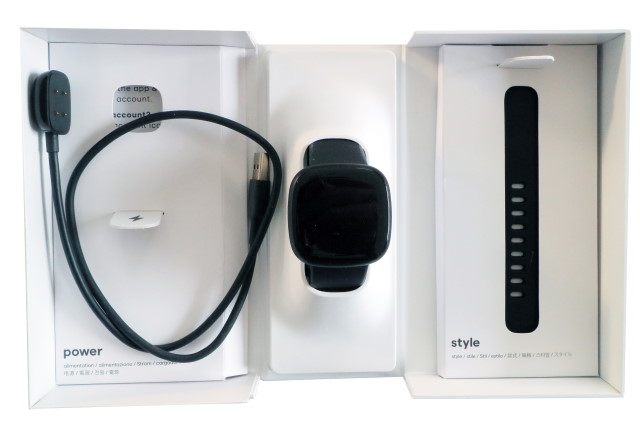 I have no qualms about the way the default wristband fits or feels -- in terms of functionality, it's a very nice design. It does lack a bit of sophistication though, the silicone rubber looks basic and perhaps even a bit cheap for a device of this price class. It's fully waterproof, which makes it easy to clean after exercise. Unfortunately, frequent cleaning is very necessary. There's something about the material of the wristband that makes it very smelly when it comes in contact with sweat. This seems to be a common issue -- a quick search on Google turns up a lot of threads about Fitbit wristband odors. I basically clean the watch plus wristband after every training session.

The Versa 3 has a 1.58-inch AMOLED touchscreen with a 336 x 336-pixel resolution. It's not an extremely large watch but it's not a compact fitness tracker either. After a couple of weeks of testing my screen already had various scratches. I'm not sure whether it's because I'm not used to wearing a watch all the time but I just kept bumping into hard stone and metal surfaces at home and at the gym! 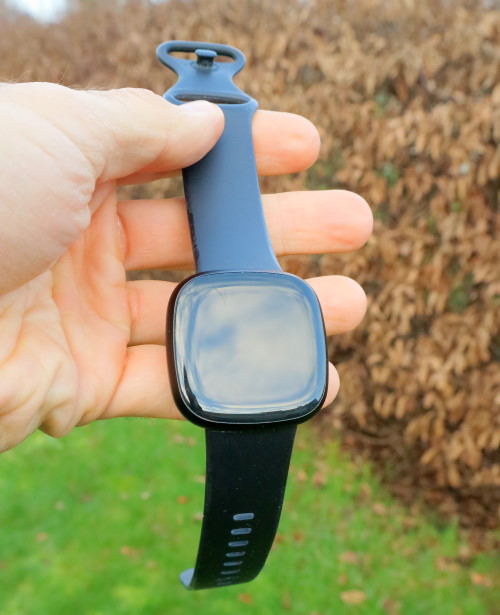 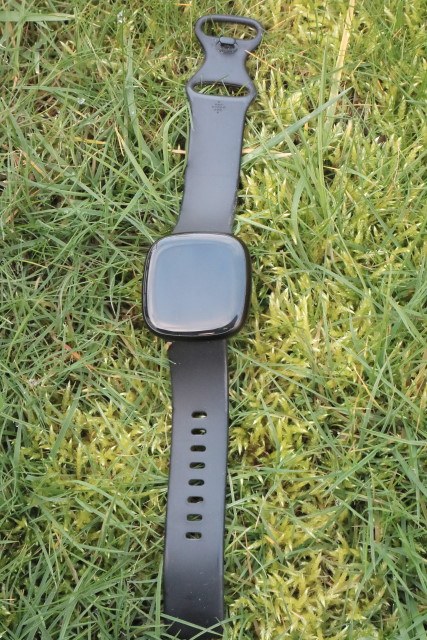 The rear is where most of the magic happens. The Versa 3 packs a new PurePulse 2.0 optical heart rate sensor which tracks your heart rate 24/7. The watch's integrated memory stores heart rate data at 1-second intervals during exercise tracking and at 5-second intervals all other times.

Besides registering your heart rate, the Versa 3 can also estimate your nightly breathing rate, heart rate variability, and skin temperature. For women, there's the option to track menstrual health. Oxygen saturation (SpO2) monitoring is also possible but unfortunately this only works with clockfaces that support SpO2 monitoring. At present, there are only a couple of clockfaces that support this feature. This is a pretty big letdown in my opinion, it severely restricts your choice. Of course, you could always change the clockface before you go to bed, but who really wants to make that a part of his or her sleep routine?

In the two photos below you can also see the speaker and microphone. The watch lets you take hands-free calls via Bluetooth. Versa 3 offers support for Amazon Alexa and Google Assistant -- but this feature is still unavailable in my region so I wasn't able to test it. The screen can show smartphone notifications and you can reply to texts and notifications -- but this only works with Android-based devices and not with iPhones. There is an option to download music playlists for offline listening -- but only Deezer and Pandora Plus are supported. Offline Spotify or YouTube is not supported and it's not possible to put music on the device yourself. Oddly enough, the Versa 2 did support music transfers. 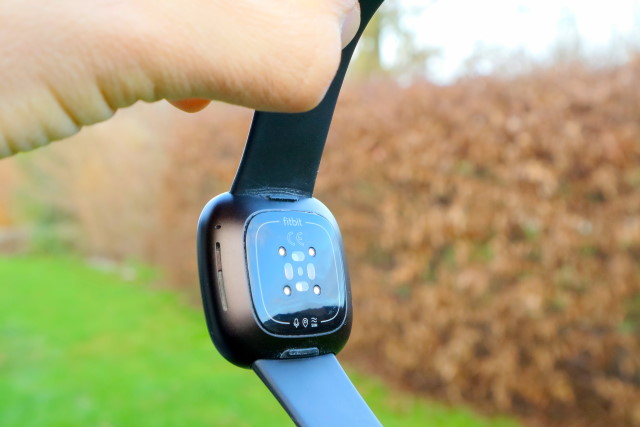 Removing the two wristbands is extremely easy, the watch has quick-release latches. It's a very good design, after weeks of usage I can say the wristbands never accidentally became loose. 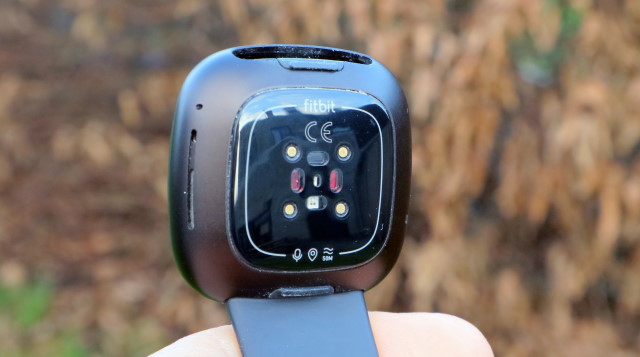 The touchscreen offers basic watch functionality and heart rate monitoring. It also gives access to a wide range of features like the voice assistant, an overview of today's activity, exercise tracking, a settings menu, the ability to set alarms, a timer, a weather overview, a calendar, some music controls, and even a find my phone function. I almost forgot to mention it but another great feature of the Versa 3 is the ability to make contactless payments -- ideal during these corona times. Versa 3 has an NFC chip and you can link it to your debit or credit card via Fitbit Pay. The only catch is that your bank needs to support it. Here in Belgium, not every bank supports this feature.

Navigation on the Versa 3 takes some getting used to - I didn't always find it very intuitive. You swipe down from the clock face to see notifications, and you swipe up to view activity stats and health metrics. Swiping left gives access to apps and swiping right provides access to the control center. Certain screens are a bit slow, the today's activity screen for example takes a couple of seconds to load. Some screens don't allow you to swipe back to the previous screen and require you to push the solid-state button to return to the clockface screen. The user interface feels a bit unwieldy at times.

Unlike its predecessor, the Versa 3 does not have a physical button. Instead, there's an indent on the left side of the watch. This is a solid-state button with haptic feedback. You need to cover it with your entire finger to activate it. A single press will wake up the screen or return you to the clockface. A double press provides access to a configurable list of favorite apps and "press and hold" can be used to perform a specific function like opening your favorite app, accessing music controls, using Fitbit Pay, or opening the voice assistant.

The solid-state button is also used to reset the device, should this ever be necessary you can reboot the Versa 3 by pressing the button for ten-seconds until you see the Fitbit logo. Early on during my testing I encountered some crashes but since the latest firmware update the stability is a lot better. 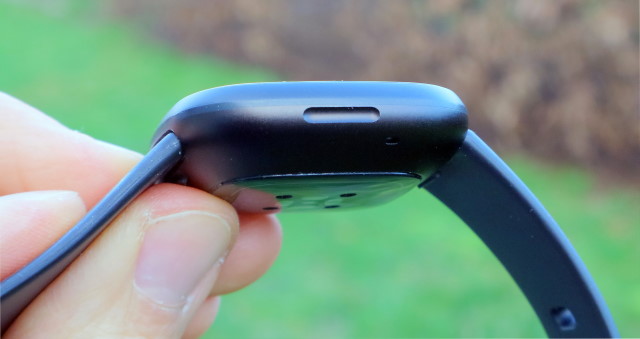