Maybe I'm getting old but I can still remember the time when Kingston exclusively made memory products. These days, the firm's HyperX brand is very well known for its wide range of gaming peripherals. HyperX sells mice, keyboards, headsets, and other devices to the fast-growing gamer market. In this review I'm taking a closer look at the HyperX Pulsefire Surge, a relatively basic gaming mouse with 360-degree RGB LED lighting. It's a wired model with six programable buttons and the PixArt 3389 sensor with 16k dpi.

The mouse ships in a cardboard box, it has some nice pictures as well as an overview of the peripheral's key features. The mouse currently sells for $54.99 (49.35EUR) -- which is a relatively affordable price for a gaming mouse. 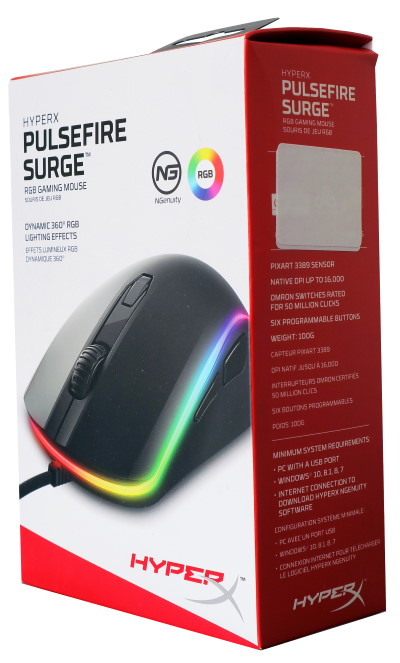 The Pulsefire Surge has a symmetrical design with a relatively compact body, it measures 63mm x 120mm x 41mm. Be aware before you purchase it that it's on the small side versus a lot of other gaming mice. Given its design, the Pulsefire Surge is best suited for claw-style grips. Overall, the Pulsefire Surge looks quite unassuming and perhaps even a bit basic when it's not powered on. You could mistake it for a basic office mouse, it just looks so simple. This changes when you plug it into a USB port though -- the 360-degree LED ring looks really amazing. The peripheral weighs exactly 100g without the cable. It's not a light-weight gaming mouse by today's standards, but it's not heavy either. The surface has a matte finish and the bottom has a backlit HyperX logo. 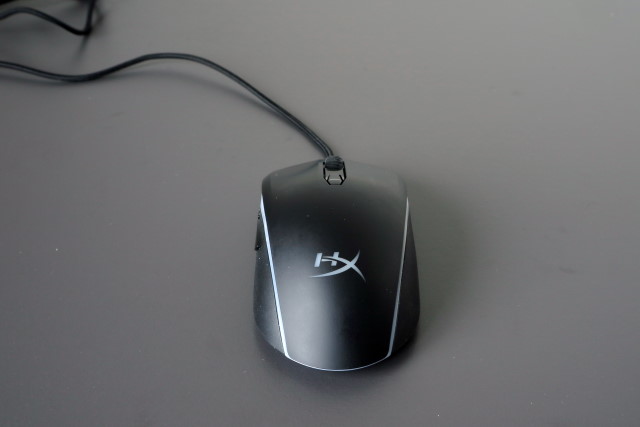 HyperX opted for Omron switches for the left and right buttons, these have a rating of 50 million clicks and feel very solid. There's a clickable scrollwheel with slight ridges for extra grip. Under the scrollwheel there's a small button, by default this one is used to adjust the DPI setting. All buttons are programmable via the HyperX NGENUITY software. You can assign macros and the mouse has onboard memory to store three profiles. 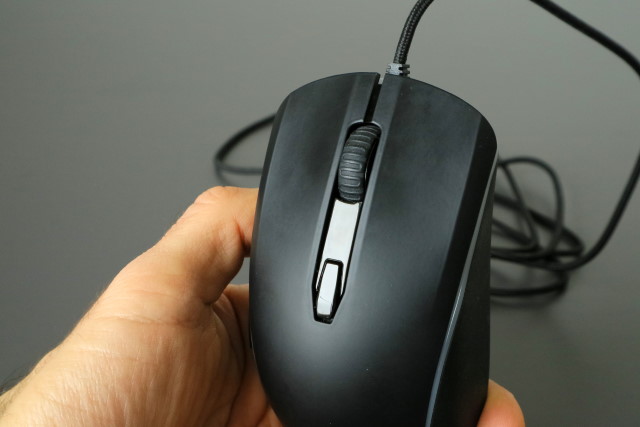 The left side has two buttons, by default these are used as back and forward buttons. Of course, you can customize the functionality via the HyperX driver. The side buttons are responsive and well-designed -- they require just the right amount of force to be activated. My biggest gripe about the Pulsefire Surge concerns cleanliness. The pictures were taken after using the mouse for a couple of weeks and as you can see the mouse's surface is already getting dirty. I actually cleaned the Pulsefire Surge right before taking these pictures, but the matte black finish is hard to keep clean. Sadly, this is an issue a lot of products have these days. 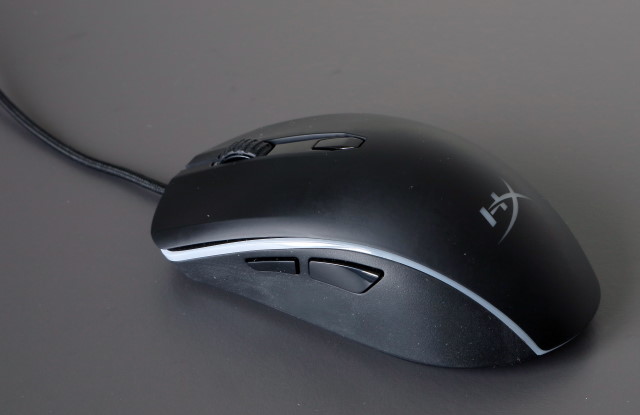 No buttons on the right side but the RGB LED ring does go 360-degrees around the mouse. Overall, the Pulsefire Surge doesn't have a lot of bells or whistles -- it largely focuses on delivering the basics in an aesthetically pleasing format. The build quality is also top-notch -- it feels solid and there's no squeaking. 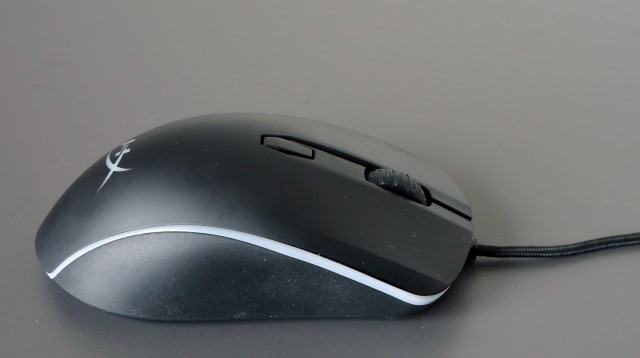 The USB cable is braided -- something we're seeing on a lot of gaming mice these days. It's 2 meters long and has a standard USB Type-A connector. 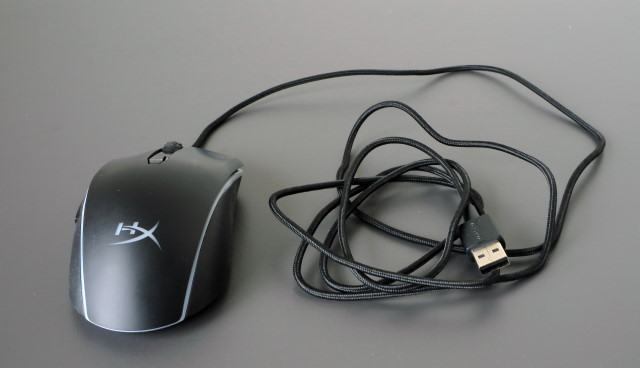 HyperX gave the Pulsefire Surge two very large mouse skates to ensure a nice glide over your gaming surface. This is definitely a big improvement over the small mouse feet we used to see back in the day. The mouse features a Pixart 3389 optical sensor, this model supports a maximum of 16000 dpi. The maximum speed is listed at 450 IPS and the maximum supported acceleration is 50G. Polling rate is 1000Hz (1ms). 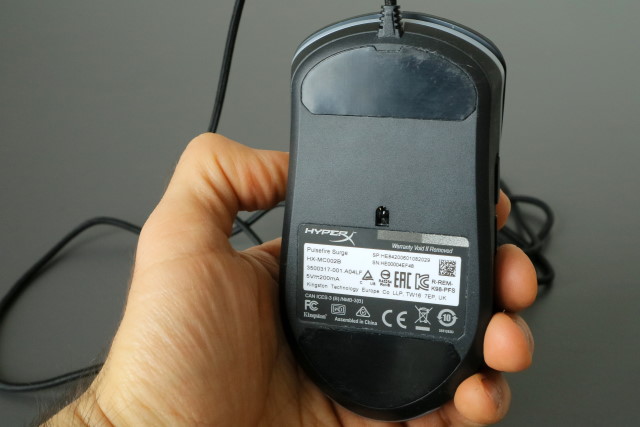 The best part about the HyperX Pulsefire Surge is the RGB lighting, HyperX really managed to integrate this in a very tasteful way. As I mentioned earlier in his review, the mouse is rather unassuming when it's powered off but when the RGB LEDs are activated it's quite a looker. There are four brightness levels and the RGB effects look great both in daylight and dark conditions. 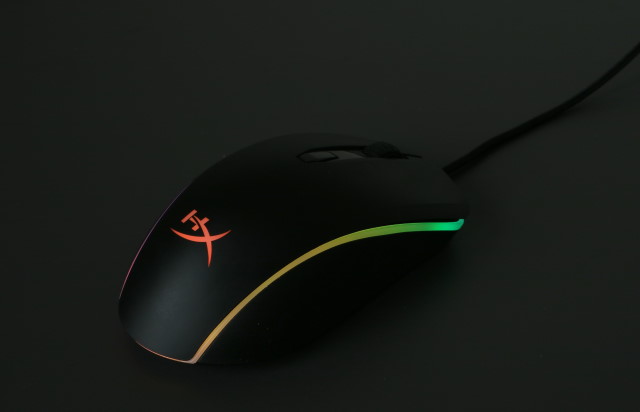 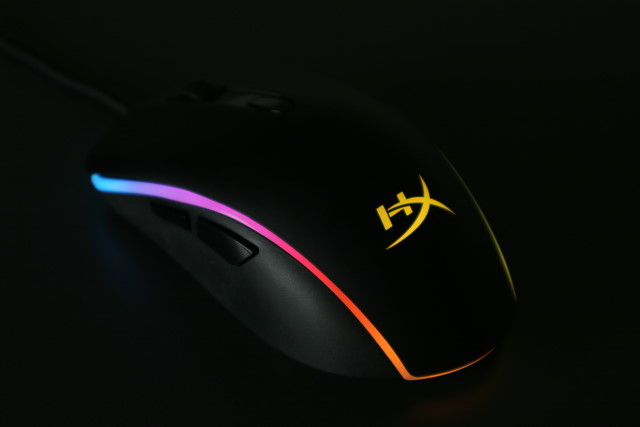 Installation of the HyperX NGenuity software is not necessary to use the basic functionality of the mouse but you do need it if you want to program the buttons, use macros or customize the RGB LED lighting. The LEDs have 32 independent light zones -- which is quite a lot! The software gives great control over the RGB LEDs and has some presets like setting a single solid color, color cycling, and breathing, wave, or trigger effects. If you don't like RGB LEDs, you can completely disable this feature too but that would be a shame as it's really one of the defining features of the Pulsefire Surge.

Key takeaway
The HyperX Pulsefire Surge performs well across the board. Its 16k DPI sensor does an excellent job and keeps up even during the most demanding first-person shooter sessions. Unless you need a ton more buttons, the Pulsefire Surge is ideal for a wide variety of video games and it's also well suited for general productivity. It's accurate, responsive, and its buttons feel very tactile. For $54.99 it's a decent contender and its 360-degree RGB LED ring is truly a sight to behold -- HyperX really executed RGB LEDs impressively well with the Pulsefire Surge.