Antec recently launched their own line of rounded cables, the Antec Cobra Cables. Why did they call it Cobra? Well, I guess that they named it Cobra because these cables are very flexible, and their black nylon mesh with red stripes really makes them look a bit like a snake. Why would you need rounded cables you ask? First, it looks a lot better than the ugly bulky flat IDE cables, and second, it improves the airflow in your case!

The cables came in this nice good looking boxes, even the box has a red snake pattern. Damn will we be putting snakes in our case?


On the left, you have the rounded IDE cable and on the right the rounded Floppy cable. I found it a little bit disappointing that the Floppy cable doesn't have a braided silver mesh shielding, not because my floppy drive would ever need that but because now the cables don't really fit for the full 100% with each other as you can see on the pictures. The IDE cable looks a lot kewler with the reflective silver mesh behind the nylon mesh. The IDE cable is a lot longer than the Floppy cable, the floppy cable is 16" (40,6cm) and the IDE cable is 26" (66cm)! These are a lot longer than most standard flat IDE cables.

These are some pictures of the IDE cable. On the second picture, you can see his red connector and the black protective boot cover. On the third, you have the grounding strap. The IDE cable has 2 device connectors and one motherboard connector. It's 26" (66cm) long, the first part is 10" (25,4cm) and the second part 16" (40,6cm). It has a dual shielding ; an aluminum foil and a braided metallic mesh + ground wire for superior signal clarity like Antec claims. Also, the data wires are twisted-paired to eliminate crosstalk. The floppy cable is a lot less spectacular, it has a black connector and a black protective boot cover. It's 16" (40,6cm) long and it has a nylon sheathing Here you can see the difference in looks, the IDE cable on the left looks a lot better thanks to the braided metallic mesh.


Performance
Antec claims that these cables provide better performance than standard IDE cables. I performed the "File System Benchmark" from SiSoftware Sandra to find out if it's true. The tests were done on an old test system, and I know that most recent systems HDD will give results 7x higher than these but still it's interesting to see what these cables can do for an old system. I've run the test three times, and I picked out the best results. 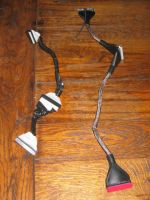 We'll benchmark the difference between these two cables. The one on the left are standard IDE cables, which I have rounded myself a few months ago. You can see that the Cobra Cables have a lot more style and look a lot more professional than the other ones.


With standard self rounded IDE cables

The standard cables gave me 3717KB/s, the Antec Cobra Cables gave 4074KB/s. That's a difference of almost 10%! But to be honest I couldn't really notice any difference while I was working with the PC. Temperatures didn't drop dramatically, only 0.5°C less than normal with the self rounded cables. If you change from standard flat cables to the Cobra cables then the difference will be higher of course. 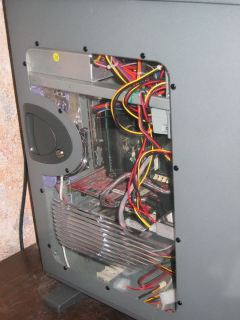 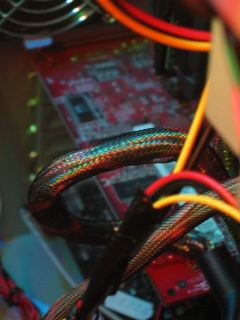 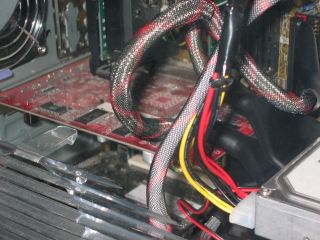 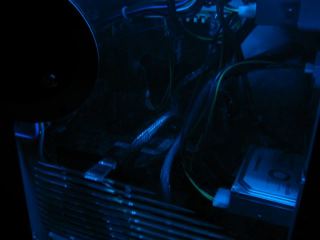 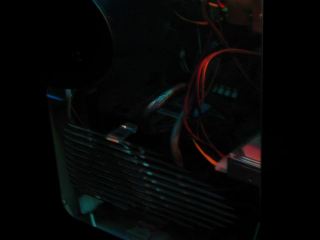 Conclusion
Overall I was very pleased with these 'Snakey' Cobra cables from Antec. They look a lot more professional than standard ribbon IDE cables and even better than most other rounded cables. More important is that in the benchmark I performed I could see a difference of almost 10% against a standard flat IDE cable!
Prices : The IDE Cobra Cables costs $14.95 and the Floppy ones $9.95.

DV Hardware awards the Antec Cobra Cables with a 9/10!

Comment #2 posted by Anonymous on 2007-04-03 18:54:05
Typically, you can attach the grounding strap to a part of the chassis. Unfortunately, they are very short, so they are typically attached to the hard drive bay by screwing them into an open hole.

WARNING: Do NOT attatch to the hard drive!