Given Apple's total negligence of the Mac computer platform, it's no surprise that the marketshare of Mac is dropping. But the rate at which the Mac userbase is dropping is surprising. Data from Net Applications reveal the Mac had a global user share of just 6.1 percent in December 2016, down from a peak of 9.6 percent as recently as April 2016.

This is the lowest marketshare Apple has held since August 2011. It's the result of Mac computer sales dropping at a faster rate than the average sales drop of Windows PCs. As we wrote half a year ago, lots of Mac enthusiast feel left out in the cold as Apple is no longer updating its Mac lineup as fast like it used to in the past.

Net Applications measures operating system user share -- an estimate of the proportion of all personal computer owners who run a device powered by a specific OS -- by counting systems whose browsers reach websites of its clients.

Linux on the other hand is close to a peak. The user share of Linux came in at 2.2 percent in December 2016, just a fraction below its 2.3 percent peak in November 2016. The first time Linux surpassed the 2 percent mark was in June 2016. 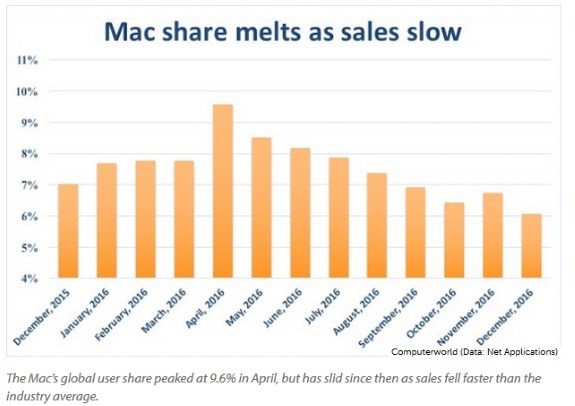