Micron to scale GDDR5X up to 16Gbps, GDDR6 arrives next year

Posted on Monday, Jun 05 2017 @ 13:53 CEST by Thomas De Maesschalck
While there was a lot of hype about HBM and HBM2 the last couple of years, it seems increasingly unlikely that these technologies have the potential to dethrone GDDR in a big way. Micron just provided an update about its GDDR technology roadmap and indicates it now has GDDR5X prototypes running at up to 16Gbps, which is in-line with the expectations the company had in 2015.

Micron also revealed its GDDR6 memory will enter mass production in early 2018. This is a dual-channel architecture for the first time and it introduces an FBGA180 ball package with increased pitch to limit interference at high frequencies. GDDR6 promises up to double the density but Micron isn't projecting an increase in maximum performance versus GDDR5X. 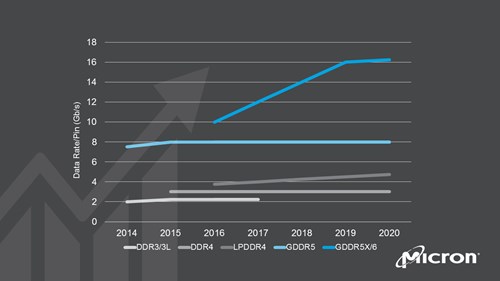