Note: This article was originally published in 2003.

Some motherboard makers like Asus, Abit, and AOpen however, have found a way to do the same kind of trick on the Intel Springdale chipset (Intels PAT was only intended for the Canterwoord chipsets). Intel's PAT was one of the only things that made a 'major' performance difference between the Springdale and Canterwood chipsets, now let's see how the AOpen AX4SG Max scores with PBE enabled and disabled in some various benchmarks! To enable the Performance Boosting Engine you will need to update the BIOS version of the AOpen AX4SG Max motherboard to version 1.01. 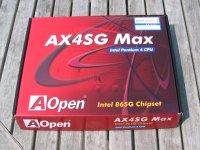 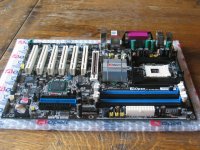 What is PBE Technology? (from AOpen website)
Acting as similar as PAT in uplifting the system performance, PBE enables users to optimize the accessing speed and quality between the CPU and Memory to 3% or 5%. Theoretically speaking, the CPU must go through some standard paths to access memory. However, with an optimized path created, the CPU may access memory in a faster way without going through standard paths. Therefore, PBE effectively shortened the distance between CPU and memory and thus increasing system performance as a matter of fact. And what makes PBE an excellent function of all is that it applies on all 865 series motherboard 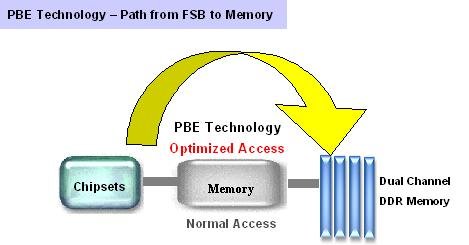 By default, PBE is disabled, why you are asking? Read this warning from AOpen : Enabling this feature will make maximum use of your RAM modules. This is not the standard specification of Intel 865G/865PE chipset. Uneven quality RAM modules in the market may not able to withstand this kind of extreme usage and cause the instability of your system. You are taking your own risk for taking advantage of this benefit.

First we check out some application benchmarks, we start with the SiSoftware Sandra 2003 Benchmark suite :

This was the first test, especially the Dhrystone ALU score differs a lot, almost 2%. The Whetstone FPU only a little and the iSSE2 shows around 0.5% performance increase. 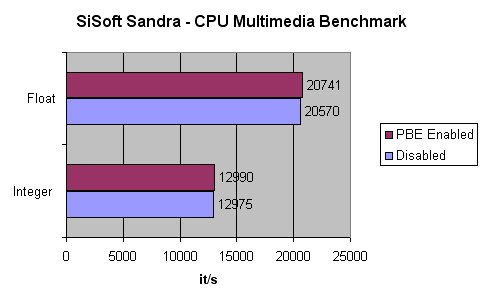 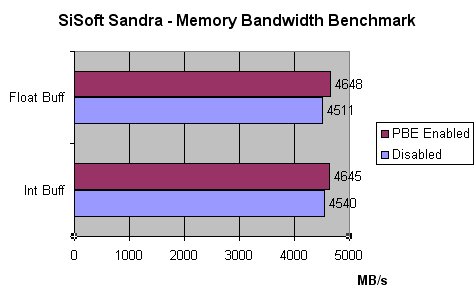 The Memory Bandwidth benchmarks shows us in both cases a bandwidth increases from 105MB/s(2.3% more) in Integer Buffered, to 137MB/s (3% more) more in the Float Buffered benchmark

The Performance Boosting Engine shows a performance increase of 0.61 seconds in this case.

We Rarred 100MB of data with WinRAR, in this case PBE shows us a performance increase of 1 second.

And as last application benchmark we have the PCMark2002 benchmark. Especially the CPU score increased a lot, with 4%, the HDD score only a little and the Memory score with almost 1.2%