A half year ago I took a closer look at the very quiet NF-S12 120mm fan from Noctua, these fans had a pretty good airflow-to-noise ratio and received recommendations from websites all around the world. Last month Noctua released a new quiet high-impedance 120mm fan which they called the NF-P12.

The NF-P12 is a new 120mm fan with several improvements for very silent operation. Noctua claims the NF-P12 has been specifically designed for high-impedance applications such as processor coolers and watercooling rigs and features "psychoacoustic" improvements to make it less annoying to the human ear.

Is this just some smart marketing talk or are these fans really that quiet? Read on to find out.

"One of the main difficulties in the design and development of axial fans is to achieve a good balance of the three key parameters of airflow, pressure, and noise", explains Mag. Manfred Stadler from the Austrian Institute for Heat-Transmission and Fan Technology (Österreichisches Institut für Wärmeübertragung und Ventilatorentechnik, ÖIWV). "Even in the field of PC cooling, each application has different requirements though: Whereas CPU coolers require high static pressure, it's mostly the airflow to noise ratio that counts when it comes to case fans. Common fans are usually designed to be all-round solutions compromising in certain areas in order to achieve solid results in all typical applications. Noctua, on the other hand, is following a two-fold approach with its NF-S12 and NF-P12 fan series in order to achieve optimal results at various applications: While the NF-S12 was optimized so as to provide a class-leading airflow to noise ratio in the lower speed ranges and therefore makes for an excellent case fan, the NF-P12 was designed to produce high airflow and an outstanding amount of static pressure, which makes it perfect for use on CPU coolers and other high-impedance applications."

The NF-P12 ships in a nice-looking retail box which uses Noctua's typical brown/blue/black colour scheme. The back of the box features a door which can be opened - inside there's lots of information about all the special technologies that are used in this fan. 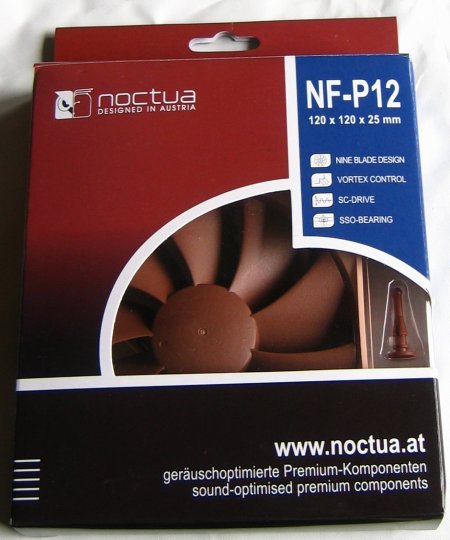 Inside the box you'll find the 120mm fan, four vibration compensators, a 3 to 4-pin adaptor, the Low-Noise-Adaptor (L.N.A.), the Ultra-Low-Noise Adaptor (U.L.N.A.) and four fan screws. 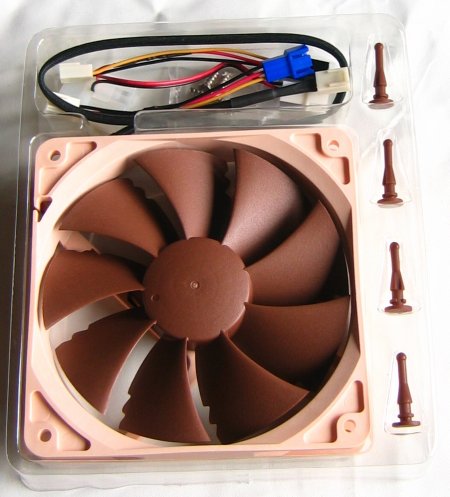 Both fans use a SSO-bearing and one of the first things you notice is that the NF-P12 spins a bit faster. At 12V the NF-P12 has a rotational speed of 1300RPM while the other fan spins at 1200RPM. With the ultra low noise adapter (U.L.N.A.) the difference is even bigger: the new NF-P12 spins a third faster than the NF-S12.

The higher rotational speed results in more airflow but also increases the noise levels a bit but the difference isn't too dramatic. If the 19.8dBA reading is taken at a distance of 1 meter these fans should be practically inaudible once they're placed in your PC. I couldn't find information about the static pressure of the NF-S12 but according to some graphs on Noctua's site, the new NF-P12 provides a lot more static pressure, which makes it more suitable for applications like CPU cooling.

Another thing I noticed in the specifications is that the NF-P12 uses a bit less power and that just like the NF-S12 it has a long life of over 150,000 hours (more than 17 years of continuous use). According to the data on Noctua's site the NF-S12 fans are perfect for case ventilation while the NF-P12 does a better job in applications that require high static pressure like the cooling of processor heatsinks or water radiators.